The objective of HAMcast lies in the development and practical analysis of a component for group communication as part of a multiservice Internet architecture. Encapsulated by an application-transparent API, HAMcast enables the global provisioning of a hybrid, adaptive multicast service. Its architecture will follow an evolutionary model using a universal service middleware that does neither require a deployment by providers, nor dedicated network implementations by application programmers.

As a sample solution, HAMcast falls into the visionary concept of an NGI architecture of an open network that allows for establishing new services based on multiple layers and gradually deployed protocols. This approach decouples the processes of application development and infrastructure deployment in a way suitable for resolving the backlog of innovations that is currently present at the network layer.

This project will yield the concept of a multiservice framework, including the prototypic realization of a hybrid, mobility-agnostic group communication stack. All results will be deployed within G-Lab and may serve as the basis for new, group-oriented systems and applications. Building up on this seminal work, further novel communication services may be integrated promptly along this evolutionary path to a future Internet.

The architectural elements of a multilayered multicast service architecture including its layer transitions will be specified and concepted. This part will in particular address the (internal) routing function of an "Intelligent Multicast Gateway", protocol stacks in end systems and at relaying peers. The entire architecture will remain open by means of suitable interfaces that allow for incorporation of additional, new relaying protocols at all layers. An open interface for various interactions with Internet Service Providers (ISPs) will be provided, as well. 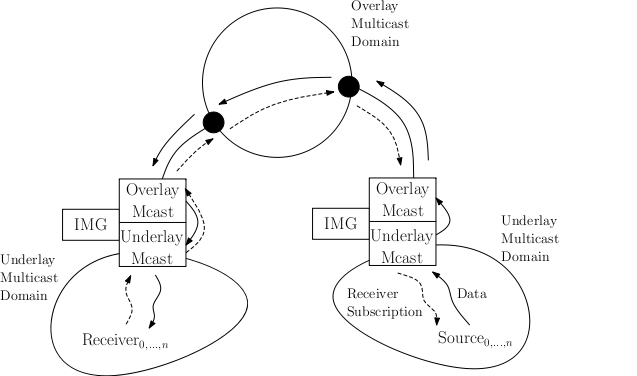 The key concept for user-friendly deployment will be contributed by an uncomplex, service-conformal API that encapsulates the underlying middleware and layer-adaptivity. Applications, as well as architectural components will be accomplished with the help of this API-encapsulated middleware.

A hybrid routing layer will be built upon existing protocols, emerging mobility extensions and by contributing suitable extensions for the discovery and interaction of the architectural components discussed above. This routing design will in particular focus on a seamless, ubiquitous availability of group services that meet multimedia real-time constraints.

An information interface towards ISPs will be developed and tested, thereby staying in close agreement with results of the IETF ALTO working group and advises obtained from the peering service partner (BCIX). Multicast in general, but in particular overlay group distribution may gain significant advantages from knowledge about provider topologies, heterogeneous link transitions, load conditions, alternative paths etc.. The exchange of such underlay information is of mutual interest for users, application service providers and ISPs.

Multicast amplifies traffic in the network and places thus the inherent threat of misuse by DoS attacks. To prevent a hindrance of its deployment for security reasons, member authentication schemes are needed and will be provided as a default option in HAMcast.

Test, measurement and optimization in the G-Lab testbed:

The architectural components of HAMcast, as well as the integrated multicast service are to be thoroughly tested and measured by experiments. This will provide a proof-of-concept at first, but more importantly will reveal optimization potentials needed in practice, at second.